Skip to content
Home/Musings/Principles Before Position, Part 2: Is ‘lifestyle’ really a choice?

Principles Before Position, Part 2: Is ‘lifestyle’ really a choice?

Part 2: Is ‘lifestyle’ really a choice? The socio-cultural-political-corporate determinants and the myth that ‘personal responsibility’ is all that matters

Beneath and upstream to our own individual biology and mind-states, we live in a society and culture that fundamentally determines how we live in obvious and insidious ways. In modern society, we live in a situation where high-calorie, nutrient-poor food is everywhere and cheap, it is easy to be inactive and it is sadly common to be alone. Over 60% of people in our society are overweight yet we continue to blame the individual. If over 60% of children failed a test, one would consider that this is not a marginal or lazy few, but rather this is a systemic problem; perhaps the test, perhaps the teacher, perhaps the curricula. So, whilst the choices and sovereignty of the individual undeniably matter, the environment in which individuals live is of crucial importance.

Despite similar (though not the same) recommendations – real food, not too much, mostly plants – from the first dietary guideline in 1982 up until today, the general population has not adhered to these guidelines, largely due to a variety of social pressures. Though there have been some improvements over the past two decades (1), just 7% of adults and 5% of children eat sufficient servings of vegetables per day, with 35% of daily calories coming from ‘discretionary’ food choices, i.e. junk ‘food’ (2).

In America and other countries around the world, the average caloric consumption has increased by approximately 20% over the past 40 years, with fat (especially processed vegetable oils) and refined carbohydrate intake increasing, while calories from vegetables, animal products and eggs remaining largely unchanged (below). 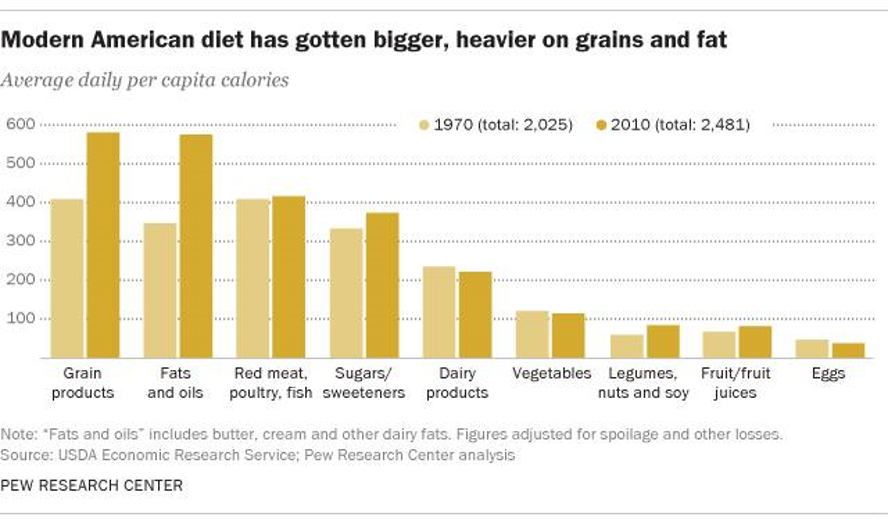 This increase in general and processed food consumption is affected by a myriad of factors beyond individual choices alone, including, but not limited to, food availability, accessibility and the range of choices available, as well as advertising. These, in turn, may be influenced by geography, demographics, disposable income, socioeconomic status, urbanisation, globalisation, marketing, religion, culture and consumer engagement and health literacy (3). Crucially, health literacy is only adequate in 20-50% of Australian adults (2). Outside of food choices, social determinants influence a range of other factors that can affect health choices. Sir Michael Marmot, one of the global leaders in the social determinants of health, performed a study in 1970 which demonstrated the impact of socioeconomic status in cognitive scoring. Children who have low cognitive scores at 22 months of age but who grow up in families of high socioeconomic position improve their relative scores as they approach the age of 10. In contrast, children with high scores at 22 months, but who grow up in families of low socioeconomic position, worsen as they approach age 10 (below). This research indicates that social determinants have deep and profound effects on an individual’s choices in health and life. 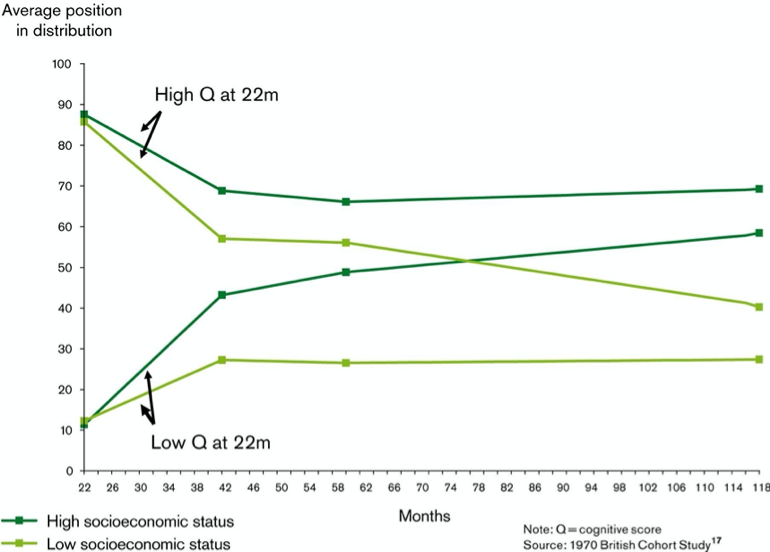 I would consider it a public disservice if I did not briefly address the (well-documented) tactics the food industry uses to influence public policy. These powerful corporations undertake strategic, well-coordinated and deliberate approaches to influence scientific evidence and expert opinion, both directly and indirectly via external organisations – including scientific bodies and medical associations – to overcome the global scientific and regulatory challenges that may impede their profits and growth (4). Major concerns about the participation of the food industry and ‘stakeholder consultations’ in scientific research and guideline development arose because, for decades, the tobacco industry used identical tactics to exert influence. For example, an investigation into the sugar industry in the United Kingdom found multiple connections between the sugar industry and nutrition experts, which led to an explicit call for more careful scrutiny of the sugar intake guidelines (5, 6).

As health professionals, we are frequently working with patients who are already unwell and far ‘downstream’ of these social, political and corporate determinants of health. Thus, attempting to prevent or reverse disease against a tide of personal (knowledge, motivation, isolation), clinician (knowledge, confidence, time limits, disease), healthcare (funding, access) and the aforementioned social, political and corporate barriers is extremely difficult – though not impossible.

Thus, if the scientific and medical community desire a more realistic and beneficial impact on the health of the population, and wish to be able to provide independent, evidence-based medical nutritional therapy, it is crucial to be aware of and to advocate for reform at the social, political and corporate level.

Principles Before Position, Part 3: We can no longer ignore the externalities of our food choices

If you are interested in further pursuing some of the principles outlined above, a couple of my podcasts cover these topics in-depth:

#102 Do We Need System Change? With Dr Sandro Demaio and Natalie Molino